Home / News / What is Kalimba

Kalimbas are musical instruments which were originally exclusively created and played in Africa. Today kalimbas can be heard all over the world. These hand-sized instruments have numerous advantages: they are easy to play, have an original and delicate sound and can be produced in various tunings.

The word ‘kalimba’ in Bantu languages means “little music”. But ‘kalimba’ is just a generic term for a whole family of instruments which are also called lamellophones. A lamellophone like the kalimba consists of a series of thin metal plates or “tongues”/tines which are fixed to a box or a wooden block serving as the resonating body or sound box.
Kalimbas have a long tradition. There are a lot of different styles of these instruments in Eastern and Central Africa. Their names are as numerous as their designs and tunings: They are called mbira in Zimbabwe, kalimba in Malawi, likembe in Central Africa, nsansi, malimba, uimba or ringa in Mozambique, kadongo in Uganda, timbrh in Cameroon, lulimba or ulimba in Tanzania. In African countries people dance and sing to the sound of kalimbas. The rhythm is played by rattles and other percussion instruments. Kalimbas are also used in ensembles where two or more kalimbas are played together.

The kalimba has become a world musical instrument for quite some time. It is used worldwide in Jazz, by bands playing world music, by singer-songwriters, but also as a solo instrument. One thing is certain: the possibilities of playing a kalimba are not totally exhausted yet. There are even some famous kalimba players outside of Africa by now. All of them recorded albums/CDs and should be serving as creative directors for kalimba novices.

A kalimba, or thumb piano, is a lesser-known percussion instrument which produces layers of rhythmic tones and soothing, relaxing sounds.

The Kalimba is a modern-day version of an African instrument known as an mbira. A traditional kalimba consists of a staggered row of metal tines on a sounding board.

Played on its own or used to add flavor to compositions, the kalimba is an essential instrument for music lovers, creators, and producers. 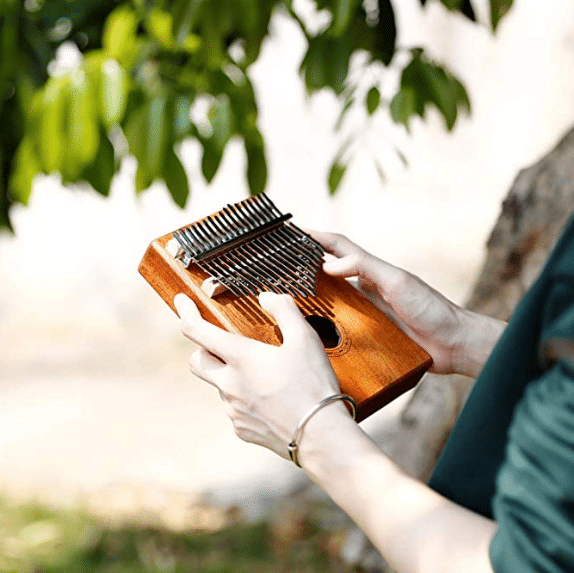 If you have never heard a kalimba before, this video will give you a good idea of how it sounds: